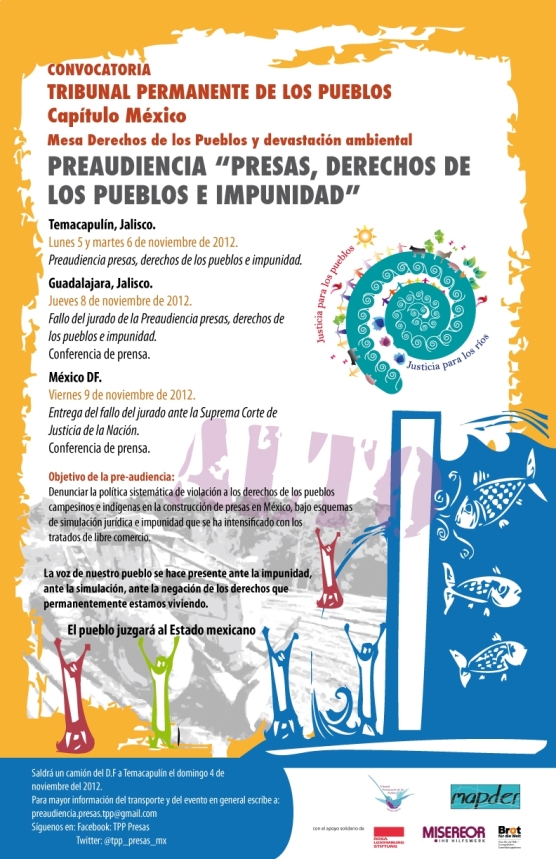 Do you know what the Permanent Peoples’ Tribunal (PPT) is? Do you know that for the next three years the PPT in Mexico will delve into and judge the crimes against humanity committed by the Mexican State against the Mexican people? Here we present a brief overview of the history of the PPT, its origin, its moral authority, the major concerns of its Mexico Chapter and suggestions on and how to follow the information presented in one of its first pre-trials: “Dams and reservoirs, peoples’ rights and impunity.”

With the aim of examining war crimes committed by the United States in Vietnam, Bertrand Russell summoned 15 public figures like Lelio Basso of Italy to gather in London, in November 1966. The first session of the first tribunal convened by the British philosopher was presided over by Jean-Paul Sartre. Members of the tribunals included Julio Cortázar, Simone de Beauvoir and Lázaro Cárdenas. After Russell’s death, the tribunals that bore his name became permanent, encouraged by dignitaries such as one of Lelio Basso’s own disciples, the jurist Luigi Ferrajoli.

As heir to this tradition, today’s Permanent Peoples’ Tribunal (PPT), established in 1979, has reviewed cases of serious human rights violations that we now consider crimes against humanity perpetrated in a number of different places in the world, including  Western Sahara, Argentina, Eritrea, Philippines, El Salvador, Afghanistan, East Timor, Zaire, Guatemala, Nicaragua and  Colombia.

The information that we share in this note about these tribunals of conscience comes from an interview we did with José Roberto Ruiz Saldaña, one of Luigi Ferrajoli’s disciples, who explained the origin and current importance of the Permanent Peoples’ Tribunal (PPT).

Let’s go back to the 1960s. Before 1968, “the hegemony of the United States in the Cold War was marked. There was no human rights culture, no human rights institutions, no alter-globalization civil society as we know it today. Bertrand Russell’s notion of calling together all those celebrities in London and then establishing a public opinion tribunal to judge those crimes in Vietnam was one of the brightest ideas in the civic career of the great British philosopher.” Our interviewee reminds us that Russell, “along with Albert Einstein, participated in mobilizations against the atomic bomb and joined in the pacifist movement for the rights of real live people, not for the benefit of institutions or existing powers.” Russell “never fell for the seductions of any ruling power.”

No less valuable was the initiative of Lelio Basso, “the noteworthy Italian political leader, a Constitutionalist who suffered the harsh rule of Mussolini, enduring persecution and imprisonment.”   Basso reintroduced the option of the public opinion tribunals: “We recall that the coup d’etat in Chile took place in 1973 and that the atrocities of the Pinochet dictatorship motivated Lelio Basso to take up the idea anew.  He felt that action was obligatory.” Thus, new sessions of the Bertrand Russell tribunals were held at the beginning of the 1970s, this time dealing with the dictatorships of the Southern Cone.

Lelio Basso had the idea of converting the public opinion tribunals into an ongoing phenomenon, but he died in 1978. His disciples and circle of friends were among the public figures who instituted the Permanent Peoples’ Tribunal (PPT) in Bologna in 1979, “one of the most effective options for promoting human rights on the international level.”

One important aspect of the PPT is that, “at the request of those affected or oppressed, a matter is investigated with full jurisdictional rigor, insofar as possible obviously, given that repressive governments do their best to keep evidence from coming to light. Once a concrete case is studied and members are familiar with it, the PPT, which maintains its headquarters in Rome in the same building with the Lelio Basso Foundation, votes to hold a session on the issue. This is the way analyses have been conducted and condemnations have been issued on dictatorships in Latin America, the war in El Salvador (when the session was held in Mexico), crimes committed in ex Yugoslavia, and restrictions on rights to asylum in Europe imposed by rightwing governments, etcetera.”

Advocates of public opinion tribunals claim that “peoples have the right to self-determination and that this is does not entail despotic sovereignty; instead, it has to do with their capacity and their power to demand their rights. The emphasis on the people is not unwarranted.” The basic idea is that “the struggle and promotion of human rights should take place through legal channels, which are not to be looked down upon. Although Lelio Basso is a well-known socialist activist, his is a modern socialism that does not scorn the law. As a matter of fact, in the ‘50s and ‘60s, Lelio Basso encouraged young people to study and practice law.”

The utilization of ordinary courts of law, UN bodies, or regional tribunals “is important, but when one realizes that a human rights culture also advances via the promotion of a democratic culture, one based on legality and the value of persons, the appeal to a public opinion tribunal takes on the same level or proportion of importance as the appeal to legal, jurisdictional channels.

In Mexico it would seem, stated the interviewee, that “people have forgotten that the need for accountability is not limited to the past when it comes to human rights violations, at least at the moral level, but that it also has to do with recent violations, and we are falling behind in our pursuit. The political advisability of condemning the abuse of power from a moral position is now becoming more obvious.”

Violence against migrants is one of the problems that this kind of tribunal must judge: “In México we need a public opinion tribunal that will take up the huge problem of the human rights violations of Central American people. Everyone now looks to the northern border, as if Mexico didn’t have a southern border. And the immigrants are having a terrible time of it. Public opinion tribunals are becoming all the more necessary, and not only for our fellow citizens, but also for Central Americans whose rights are violated by Mexican authorities.”

Mexico is now being examined and will be judged by this prestigious tribunal of conscience. For three years, the PPT will receive all the necessary information ––testimonies, denunciations, and supporting documentation of crimes against humanity committed by the Mexican State in these seven major areas of concern:

Dams and reservoirs, the rights of peoples, and impunity

As part of the PPT Mexico Chapter’s discussion table on environmental destruction, a pre-trial on the construction of dams and reservoirs in Mexico will be held on November 5 and 6 in Temacapulín, Jalisco. Denunciations will be heard regarding the effects on numerous communities and peoples, some of whom have already been displaced and others who have been threatened with forced displacement; accusations will also be heard of serious environmental human rights violations that have occurred due to the imposition of such projects, and their implications for the process of the privatization of community property: water and territories.

At the pre-trial, the affected movements from various states in Mexico will present 8 cases related to hydroelectric and water supply projects. A space for denunciations will also be opened in order to receive testimonies of other cases that have not been previously shared with the pre-trial jury.

The interdisciplinary pre-trial jury is made up of: Miloon Kothari, former UN Special Rapporteur on the Right to Adequate Housing and member of the Housing and Land Rights Network, South Asia Regional Programme (India); Maude Barlow, President of the Council of Canadians (Canada), and Senior Advisor on Water to the 63rd President of the General Assembly of the United Nations; Monti Aguirre, Latin American Program Coordinator at International Rivers (USA); Patricia Ávila, researcher at the Laboratory on Political Ecology and Society of the Ecosystems Research Center, UNAM, and recipient of the National Medal of Science, 2003 (Mexico); Francisco López Bárcenas, attorney (Mexico); and Luís Daniel Vázquez, Coordinator of the Doctoral Program in Social Sciences of the Latin American Social Sciences Institute (FLACSO).

On November 8, the jury will hold a press conference in Guadalajara regarding the final pre-trial verdict and another in Mexico City on November 9.

To find out more about pre-trial activities on “Dams and reservoirs, peoples’ rights and impunity,” consult the page of the Mexican Movement of Those Affected by Dams and Reservoirs in Defense of Rivers.  http://www.mapder.lunasexta.org/

The pre-trial program is available at: http://www.mapder.lunasexta.org/?p=2069

The information on the origin of the PPT was originally published as an interview at: http://zapateando2.wordpress.com/2009/10/20/tribunales-de-opinion-russell-de-los-pueblos-podrian-y-deberian-impulsarse-en-mexico/